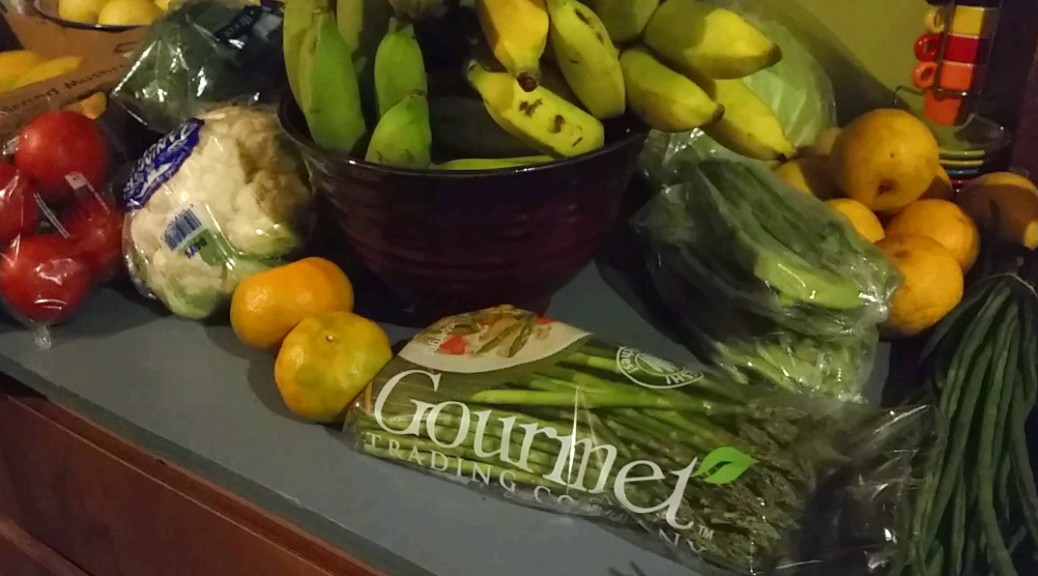 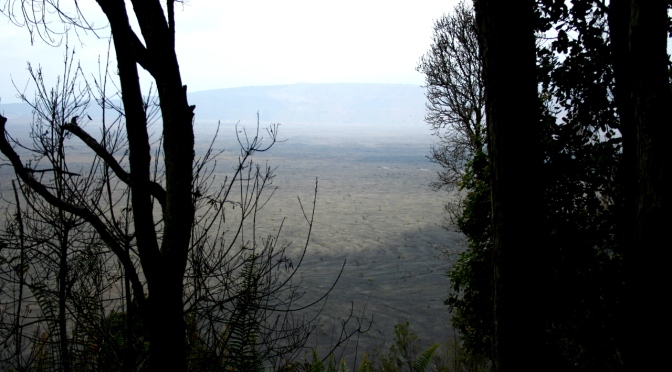 Sure, strolling around an active volcano sounds pretty daring, but Hawaii Volcanoes National Park is largely benign and full of intriguing flora and fauna.

When we arrived at Devastation Trail, we were met by this friendly little Nene – Hawaii’s state bird, endemic to the Hawaiian islands. Over the past couple of centuries the population of the rare Nene had been decimated by hunting and the introduction of predatory animals. Through conservation efforts, the nearly extinct bird has been making a comeback.

At first, the meandering trail did not seem to live up to its name. It was a lovely, paved pathway through green forests of hapu’u fern and ohia trees adorned with red lehua. 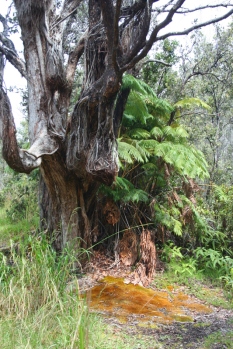 Rather abruptly, however, the trail ahead opened to reveal the true desolation beyond. 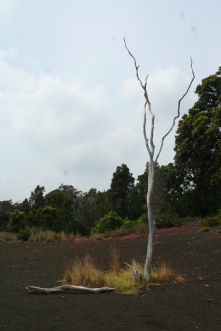 In spite of the harsh conditions, numerous interesting plants had made a home of the dry, foreboding cinderscape. 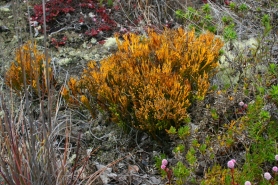 As we continued along, the trail once again dipped into green forests, which ultimately deposited us at the Byron Ledge trail head. Proceeding onward, the paved pathway gave way to trails of crunchy, glassy cinder. As we continued along the pocked cinder terrain, the trail suddenly turned steep, dipping over the crater rim into another unexpectedly green forest some ways below, standing in contrast against the barren floor of the distant caldera.

Approaching the base of the hill, the trail once again entered the forest canopy. We continued walking trail for some time until we reached the Kilauea Iki trail head which would take us deep down into the bottom of the crater. Unfortunately, that hike would have to wait for another day, as we were running out of daylight and had a long walk back.

Even so, the journey continued to yield beautiful vistas and very interesting flora. 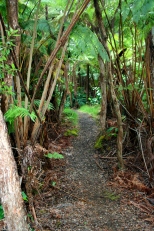 I’d best wrap this up until our next journey! I hope you enjoyed following along.

Thank you and Aloha! 🙂 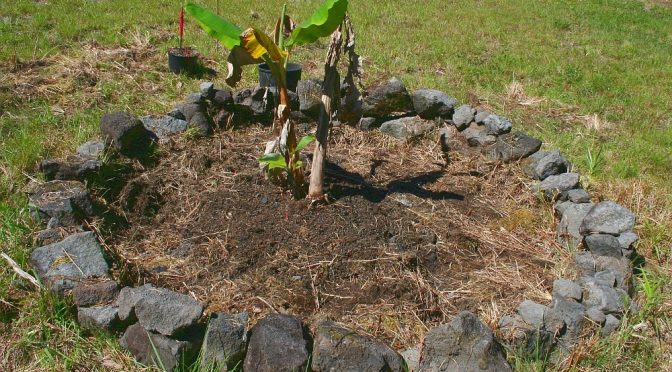 Ahhh… What a lovely day to check up on the “garden” progress.

As I mentioned before, I love trying to grow just about anything I can get my hands on. In the past couple of months, I’ve collected seeds from a variety of fruits and vegetables, both from stores and from the local farmers markets.

Among my first germination experiments were rambutan (left) and papaya (right). Both were very quick to sprout, but growth has been slow. Still they seem pretty happy, and I love the butterfly shape of the baby rambutan.

Shortly after our arrival we visited the wonderful “Uncle Robert’s”, where I sampled golden dragon fruit for the first time. I was stunned by its sweet deliciousness and absolutely had to try my hand at cultivating them. Nearly an entire month had passed without germination and I’d just about given up hope, when suddenly six of my homemade seed tabs popped open revealing these thick little shoots. 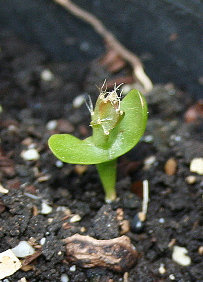 They’re growing very slowly, likely due likely to the high elevation. Still, they seem healthy and happy and have just recently developed their first cactus-like spines.

After a day trip into Hilo town and a visit to Abundant Life, a lovely little health food store by the bay front, I prepped a pot to begin an herb garden. 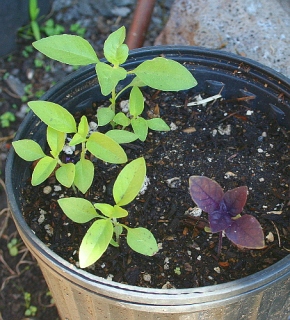 At Abundant Life, I had purchased a few packets of seeds including kale, chives, stevia, purple basil, and lemon basil.

The kale and basils sprouted very quickly, but I’ve just about given up on the chives and stevia, although I have every intention of trying them again using different parameters. I do hate to be defeated in the garden. Heheh

To salvage some confidence, I decided to grow something I knew I couldn’t fail at and had been desiring to try for some time – purple sweet potatoes! 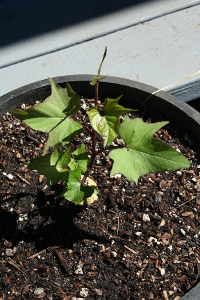 We grabbed a pack from the farmers market and ate all but one of these yummy little guys. After sitting around the kitchen for several days, it looked like it might have some little, sprouting protrusions.

I went out and tossed some grow mix in a pot, stuffed the sweet potato halfway in the dirt and stuck it under the stairs to the porch, in the shade. Easy peasy! It was a little shy for a couple of weeks, but once the first leaf decided that photosynthesis sounded pretty cool, it started going crazy.

And then there’s tomatoes… How can you possibly go wrong with a plant that is so eager to grow? We decided to try ELT [Eggplant, Lettuce, & Tomato] sandwiches, one night after bringing home some tomatoes and Japanese eggplant from the farmer’s market. They’re really yummy, just for the record. You soak the eggplant strips in a liquid smoke to make it bacon-esque and-… Oh yeah – tomatoes. Sorry. 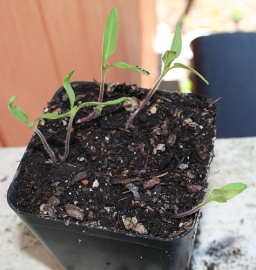 While cleaning up after dinner, I looked at the cutting board, which was covered in tomato juice and seeds, so I drained off the juice and plopped down a paper towel to wipe them up and make seed tabs. Needless to say, they’re happy little guys and growing absurdly fast. This is just a few days of growth.

This is just a pineapple top that I wanted to grow that was left over from breakfast. I didn’t have a pot prepared for it so I stuffed it in a random mound of dirt and grass in the yard, where I promptly forgot about it and went about doing other things.

Fast forward a couple of weeks – we have a big wind storm that blows the poor thing right out of the ground. I saw it laying in the driveway and picked it up to stuff it back in the dirt when I noticed brand new root nodes protruding from the side. That was exciting. It seems perfectly happy, even though it’s not in a proper growing medium from pineapples. Yay!

As you can see, things are progressing nicely around here. How are things where you are? Are you saving those seeds? It doesn’t matter where you live. I had lemons, tamarinds, and date palms growing happily in a window in Montana. If you have a passion for growing or even just a passing curiosity then run with it.

Something odd that I’d long been wanting to try my hand at is vermiculture. Since I was a child, I was fascinated by the process in which those wiggly little beasts turned most any biomass into that wondrous black growing medium we call worm castings. Well… Maybe not the “process” so much, since it’s literally just poop. The point is, it’s AWESOME. It’s a tremendous germination medium as well.

I recently tossed in a mango seed. The worms devoured the excess fruit and within a couple of weeks the seed had already begin to germinate inside of the box. Toss in the scrapings of a single papaya and in short order you’ll have enough sprouts to start an entire farm!

So, it all started for me in the autumn of 1988… Too far back? Nah… My dad was in love with this lil island in the middle of the ocean. The idea was “cool” to me, but it was really little more to me than pictures in a book or magazine.

Long story short – he took me to the Big Island and I fell madly in love with her. From the dry, desolate Kau, to the green hills of Waimea, to the lush jungles of Puna – land and sea, I loved it in its entirety.

Trapped in my Montana routine, I would dream of one day living there. After pinching my pennies for twenty years my hopes, at long last, became reality.  I put all of my resources into a plot of raw land on the Big Island.

Now, it’s a race against the clock to find jobs or other tributaries of income, get established on our property, and continue to eat.

Our Off Grid Gear

This is easily my favorite and most used tool on the homestead!

It's great for breaking new ground, digging out clumps and root clusters, and separating out small rocks.

I used this awesome little tool to rip new ground for my banana circle.

Hah! We moved to Hawaii from western Montana where the winters would drop to -36F.

After just two months of acclimating to tropical weather, we feel like we’re freezing to death when it hits 60F! Crazy stuff…

“We are a participant in the Amazon Services LLC Associates Program, an affiliate advertising program designed to provide a means for us to earn fees by linking to Amazon.com and affiliated sites.”